Michael Ammar is an award-winning author, lecturer and performer in the field of magic.


Michael’s magic encompasses a full spectrum of performance genres: from very intimate, sleight-of-hand to stand-up “parlor” magic, and now more recently – the stage with his presentation of “The Spirit Cabinet.” His disarming humor and casual poise only serve to make the impossibilities of his magic even more surprising and powerful.

When Caesars Palace debuted Caesars Magical Empire in 1997, Michael’s show was featured for over 1000 performances. Other noteworthy events in which he has performed are: Hugh Hefner’s “Midsummer Nights Dream” party at The Playboy Mansion; retirement celebration for Bud Baker, CEO of Wachovia; The “Black Tie and Boots” Inaugural Ball for President George W. Bush; “Salute to Heroes” Inaugural Ball for President Barack Obama.

His clients include NBC Universal, IBM, United Way and Paramount – among others. The type of event for which he is most commonly requested are corporate dinner parties and keynote presentations.

In 2010, Michael began stage performances with his wife, Hannah. Together, they perform a mysterious Victorian illusion, “The Spirit Cabinet” – dating back four generations in her family. They have taken this act all over the country, including the Improv in Orlando; The Abbeville Opera House in South Carolina; and the Majestic Theater in Dallas.

Michael has been honored numerous times, including Magician of the Year; six awards from the Academy of Magical Arts; FISM Gold Medal in Close Up Magic; two awards from the International Magic Awards; Dragon Award; and West Virginia University’s Distinguished Alumni award winner in 2005, for achieving international recognition in his profession.

At the Table Live Lecture 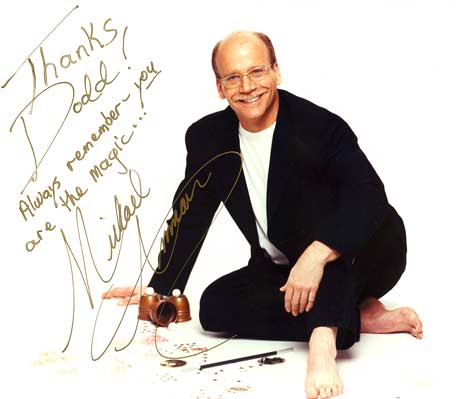 and welcome to The Magic Kit where you can find honest reviews on anything magic related (gimmicks, books, dvd’s etc) to read and learn or perhaps discover items before you include them into your repertoire.
Find out more about me ☞ misskatalin.com.
♠ Don’t forget to subscribe! ♠